The pearl of the Coral Coast 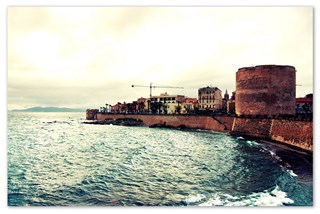 Situated in the northwestern coast of Sardinia, this town is in a very propitious position.

In fact Alghero is 300 miles far from Spain, just in front of Barcelona, in the direction of the prevailing winds, the West Wind and the Mistral, but, at the same time, it is sheltered from the northern winds by two promontories: Capo Caccia and Punta Giglio. At its back there is the fertile plain called Nurra.

Thanks to these features this area has been inhabited since the most ancient times, as you can see from the ruins that date back to 6000 b. C. and from the large number of “domus de janas” and “nuraghi”.

Alghero, whose name is supposed to derive from alga (seaweed), was founded in 1102, by the Doria family, with commercial purpose. In 1283 the Pisans tried to conquer it, but they failed; on the contrary, in 1353, the Aragoneses managed to capture the town, and, after having expelled the original inhabitants of the city, they settled here and imposed their language and their typical Spanish architecture, that Alghero will never lose, even under Savoia's reign (in 1850 a Catalan-language catechism was printed).

It is in the centre of the city that you can admire the most interesting monuments and the typical products of the local handicraft.

Starting from Porta a Terra, a wide stretch in the centre of the town, you will run into the Torre degli Ebrei or Porta Reyal, in whose Gothic arch you can see a war memorial.

Going on through via Sassari and via Mazzini, you will reach Largo San Francesco and Torre San Juan (XIV century). Walking through via Regina Elena you will come to Piazza Sulis and to the Esperò Reyal, or Sulis Tower. From Piazza Sulis you can take, southwards, the Lungomare Dante, westwards the Lungomare Cristoforo Colombo, with the Torre di San Giacomo (St. James Tower), in Gothic style, and the church of Nostra Signora del Carmelo (XVIII century); and finally, northwards, the Lungomare Marco Polo, which ends with the Bastione (bastion) del Mirador: here you can admire a wonderful view of the whole bay.

Not far from the Bastione there are the port, equipped to receive tourist ships and fishing boats, and the Porta a Mare. Then you will reach Piazza Civica and Palazzo de Ferrera (XVI century). On the opposite side there is Saint Mary's Cathedral, with a beautiful wooden crucifix (XVI century).

Farther on, in via Principe Umberto, you will come across Doria's House (XVI century), Palazzo della Curia, Teatro Civico (1862) and Chiesa della Misericordia, with a crucifix of the Seventeenth century. In via Carlo Alberto (Carrer Mayor), you will finally reach St. Francis Church (XIV century, but rebuilt in the XVI century).

Alghero's surroundings are rich of interesting places, too. Seven kilometers far from the city there is the sanctuary of Our Lady of Valverde; other interesting lags could be the necropolis of Santu Pedru, with the characteristic Domus de Janas, and of Anghelu Ruju, and the Nuragic complex of Palmavera.

As far as natural background, you can't miss the calcareous promontory of Capo Caccia, and the Grotte di Nettuno (Neptune's Caverns), some of the best in the Mediterranean Sea. Near Punta Cristallo, about 15 kilometers far from Alghero, you can find the nature reserve called Noha's Arch that can boast the presence of rare species of Mediterranean flora and fauna.

The surroundings of Alghero are very rich in beaches, every one with its own characteristics.

From the port a long seashore including Lido San Giovanni, situated in the town and easily reachable on foot, starts. This long seashore, that ends in Fertilia, takes the name of Maria Pia Beach; at its back a large pinewood stands. Towards Porto Conte, about 500 meters far from Fertilia there is the small Punta Negra beach.

Going on, in Porto Conte direction, turn left in a small road and you will reach the crowded beaches of Le Bombarde and Lazzaretto.

By the crossroads to Capo Caccia, there are many dirt roads that lead to the beaches of Mugoni Pinewood, where you can have a rest during the hottest hours.

About 17 kilometers far from Alghero there is Ville Romane or Baja di Conte Beach, followed by Torre del Porticciolo, where, on a basaltic promontory, a beautiful Saracene tower stands. Then there is the dark-sanded Porto Ferro Beach, the ideal place for windsurfers.

On the other side, along the state road 105 in Bosa direction, about 8 kilometers far from Alghero, there is La Speranza Beach, immersed in the typical Mediterranean bush.

Especially striking, the Procession of the Holy Friday consists in the simulation of the Deposition; it is probably the most important feast in Alghero and one of the most significant in Sardinia. The Fireworks on August 15th are a good attraction for a large number of people.