The main city of Sardinia

Chief-town of the island, Cagliari is situated in the southern part of Sardinia, in the gulf Degli Angeli, at the end of Campidano plain, between the sea, Montelargius and Santa Gilla's ponds, and some hills, like “Su Casteddu”(the castle). Probably founded by the Phoenicians, as we can see from its former name: Karalis or Karales, it became an important maritime and commercial town under the Carthaginian domination. Taken by the count Tiberio Gracco in 238 b.C., Cagliari went through a very prosperous period, and it became, at first, a municipality, then seat of the bishop's palace. With the fall of the Roman Empire the population moved towards the inland, in order to take shelter from the barbarian invasions. Under the Byzantine domination Cagliari, that had become the chief-town of the island, was in a state of neglect, and the inhabitants moved to Santa Igia. In those years the attempts to conquer it were innumerable, but always a failure, thanks to the help coming from the maritime republics of Pisa and Genova; and just the Pisans and the Genoese competed for the supremacy in Sardinia. In the XI century Cagliari became chief-town of the homonymous Giudicato, and, at its end, it passed under the Pisan domination, and went through a new period of development. In those years the fortified town of Castrum Kalaris was built, with the new quarters of Marina, Stampace and Villanova, and Cagliari became one of the main cities in the Mediterranean Sea, with a lively artistic flourishing. In 1324 Cagliari passed under the Aragonese domination, and Peter I of Aragona made it the seat of the first parliament; later it was involved in the war between the Aragonese and the Judges from Arborea. During the Spanish domination, the island of Sardinia and its chief-town went through a very difficult period; but with the coming of the Savoy, Cagliari was made residence of the viceroy, until in 1794, when the royal family was expelled and the viceroy killed. With the coming of the peace, in 1862, the walls were knocked down. Unfortunately, during the Second World War, Cagliari was hardly damaged, and many buildings were wrecked by the bombardments. In 1949 it was made chief-town of the Sardinian Autonomous Region.

The sightseeing tour of Cagliari can start from the place that gives the name to the city: Castello (the castle). This part of Cagliari dates back to the Pisan age, and it has always been the fulcrum of the city: in fact here there are the seats of the religious and political authorities, and of the local nobility. Surrounded by the bastions and the two towers of Elefante and San Pancrazio, this quarter is crossed by two long roads converging at the gates of Santa Cristina and Due Leoni. Here you can see the Cittadella dei Musei, where the National Archaeological and the Siamese Museum, that houses a rich collection of oriental weapons and objects, the National Picture-gallery, where many works made by the main Sardinian and Catalan artists are kept, and the collection of ceramics “C.Susini” are. The National Archaeological Museum houses many archaeological finds, like the typical Sardinian small bronzes (the statue of a chieftain, the biggest in Sardinia, is kept here) and the Nora Stone (IX century b.C.), where Sardinia is mentioned for the first time. In this quarter there are Palazzo Reale, Arcivescovile and the cathedral of Saint Mary (in Romanesque-Pisan style, XIII century, and where you can see a silver tabernacle that dates back to the Seventeenth century, and a marble mausoleum of Martino II from Aragona), the Palazzo di Città, the University, the Teatro Civico, and the churches of San Giuseppe and La Purissima (1554), in Gothic-aragonese style. The lower part of the city is out of the walls; here there are the churches of San Michele, one of the most important examples of Spanish-gothic style in Sardinia, built in the XVII century, and of Sant'Anna (1785-1817), rebuilt after the bombardments during the Second World War. Behind the church of Sant'Anna there is the church of Sant'Efisio, to which the most important feast in the city is consecrated. In the north-eastern part there are the Roman Amphitheatre and Villa Tigellio, well preserved, and, as a proof of the Punic domination, there is the necropolis of Tuvixeddu. The centre of the quarter called Stampace is determined by Piazza Yenne, where a column indicates the beginning of the road “Carlo Felice”, that leads to Porto Torres. In the quarter called Marina you can admire the only exemplar of a Renaissance building in Sardinia, the church of Saint Augustine (1850). In the quarter of Villanova is situated the late-Gothic church of San Domenico, while, in Piazza Cosma e Damiano, one of the most ancient buildings of the Christian Sardinia, San Saturno church (V-VI centuries) stands. In viale Bonaria, on the top of a hill, there are the Basilica of Bonaria and its shrine; the Aragoneses built this church in 1323.

Walking through Viale Diaz and then Viale Poetto, you can easily reach the city's beach: Poetto. It is a long seashore that leads to Quartu Sant'Elena. This beach, very frequented and crowded during the summer, is surmounted by a promontory called Sella del Diavolo (Devil's Saddle) and is provided in all services.

From May 1st to 4th one of the most important festivals in Sardinia takes place: Sant'Efisio feast. It celebrates the end of the plague in 1656, with a passing of people wearing the traditional costumes. The Saint's statue is taken to Nora on a coach drawn by oxen. Another significant religious feast is Sant'Elia, in July. If you love boating you cannot miss the Sardinia tour by boat, from May 4th. 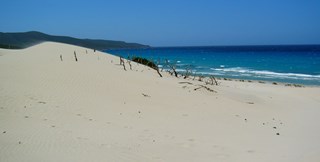 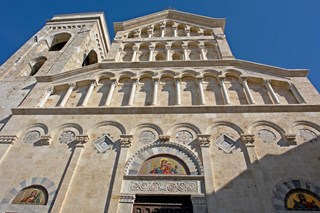 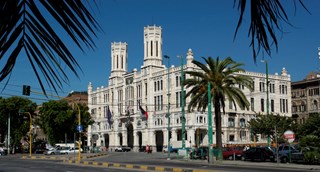